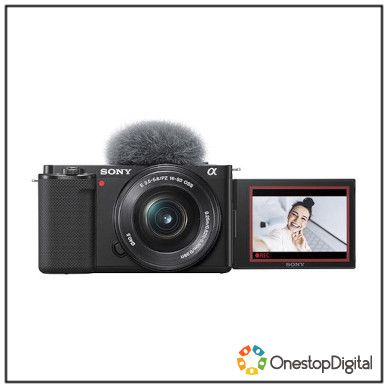 The Sony ZV-E10 is the latest in their ZV range of video centric cameras. The ZV-E10 boasts a 24MP APS-C sensor, 4K video up to 30fps, FHD video up to 120fps, a fully articulating screen that is perfect for vlogging and selfies, can be plugged directly into your PC or laptop to be used as a webcam and can even be connected with your Sony Smartphone so that you can stream on the go with top quality footage.

The Sony ZV-E10 is packed full of features that make it perfect for Youtubers and content creators. While the weight and size is comparable to the Sony ZV-1 vlogging camera, the E10 comes equipped with a higher resolution 24MP APS-C sensor, as well as an E-mount fit so that you can take advantage of over 60 Sony E-mount lenses.
The camera features an LED tally light to indicate when you are recording video which is possible at up to 30fs in 4K and 120fps in FHD.
Other features of the camera include an Instant bokeh button, to blur out the background, a product showcase button, so that focus will automatically be shifted from your face to an object when it is held up to the lens and face priority auto-exposure. This allows the camera to detect the subject's face and set the optimum exposure automatically. This is of huge use to capturing footage outdoors with changing lighting conditions.

The ZV-E10 features the same 3-channel windproof mic as the ZV-1, allowing you to capture rich audio for outstanding content creation. It’s integrated 3-capsule microphone offers the same advanced technology as found in Sony’s top-end video cameras and delivers full stereo recording with noise reduction.
The camera features a digital audio hot-shoe so that you can choose from a variety of digital audio settings including isolating a solo voice or taking some of the ambient noises from the surroundings.
There is a wind-screen included with the camera that simply clips on for when you are recording in challenging weather conditions and it also features a 3.5mm input jack so that you can use an external microphone, such as the Sony ECM-B1M Shotgun Microphone for even greater quality. There is also a headphone jack so that you are able to monitor the sound as you are recording.