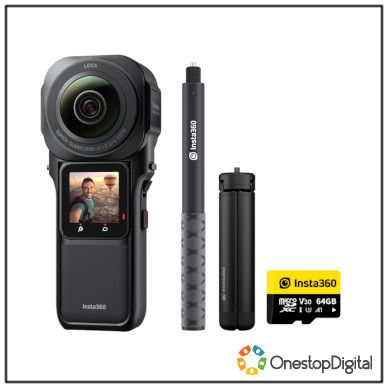 The Insta360 ONE RS 1-inch 360 Edition has been launched in collaboration with Leica. The new camera has two 1″-type sensors and produces video in 6K resolution. The 1-inch 360 Edition instant camera has better image quality and a user-friendly, compact design. The 1-Inch 360 Edition is a continuation of Insta360’s quest to make the ONE RS the most complete and flexible camera on the market. This new update transforms the ONE RS into a powerful 6K camera capable of delivering amazing results even in low light.

Unbeatable 360-degree image quality in a compact device that’s ready to go anywhere. With an interchangeable lens design, it’s ultra-versatile and upgradeable too.

Image quality that blows other compact 360 cameras out of the water. Share in immersive 360 degrees or reframe as a traditional flat video for social media.

Capture the world around you in sharp definition with seamlessly-stitched 21MP 360 stills.

Dual 1-inch sensors reveal details in the shadows like no 360 camera seen before.